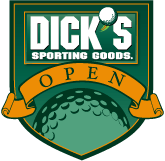 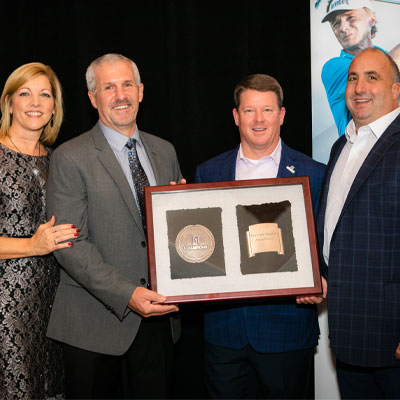 “Chris’ tremendous strength and dedication is truly an inspiration to us all,” said Brady. “We thank Chris and his fellow volunteers for their time and efforts, which allows the PGA TOUR Champions to support a multitude of charities in the cities we visit.”

Chechatka received the distinction via a balloting process that included nominations from every tournament stop on the 2018 schedule. In total, PGA TOUR Champions events enlist over 20,000 volunteers annually.

“It is an honor to be named the 2018 PGA TOUR Champions Volunteer of the Year. The DICK’S Sporting Goods Open is a wonderful community event that we look forward to every year, said Chechatka.

“It brings fans and volunteers together and, through its charitable partners, has raised millions of dollars for the local community. I am so proud to serve among the wonderful volunteers of this event and sincerely humbled to receive this award.”

A Broome County native and married father of five daughters, Chechatka has spent over 35 years as a project manager at IBM.  He’s contributed countless hours volunteering in the community, including the event for which he is most passionate for, the DICK’S Sporting Goods Open, which both he and his father, Julian, have been an integral part of dating back to the B.C. Open.

For the past 40 years, Chechatka has led the volunteer operations committee, providing set up/tear down support and serving as the tournament’s all-around handyman.  His team in charge of clean up following the Friday night concert – attended by over 20,000 fans last year – ensuring the course is spotless and once again ready for competition the next day.

In November of 2017, after going to his family doctor about a persistent cough, Chechatka received the devastating diagnosis of Stage 4 kidney cancer. He entered the fight of his life, enduring multiple surgeries and many rounds of chemotherapy that whittled his frame down more than 50 pounds, but did nothing to shrink the softball-sized tumors on his liver and kidneys. Doctors in New York City advised his wife, Karin, to take him home on hospice care.

Soon after returning to Endicott, he began an immunotherapy trial at a local hospital which helped him regain some strength, and in March of this year, CT scans revealed the tumors were beginning to shrink, marking the first good news he had received since his diagnosis.  In the months that followed, he began to regain weight and slowly returned to everyday activities.

Chechatka set his sights on returning to this year’s DICK’S Sporting Goods Open, and while he is still not cancer-free, his tumors have continued to shrink, and he was healthy enough to once again be a part of the event, showing up every day with his usual boundless energy and upbeat spirit.

“Volunteers are the face of PGA TOUR Champions events, and with the DICK’S Sporting Goods Open, Cheech is at the heart of those efforts,” said tournament director John Karedes. “He has battled back from insurmountable odds with unwavering optimism, and I know our community will be thrilled to learn that he’s the 2018 Volunteer of the Year.”